To be read in the hushed and reverential style of a David Attenborough documentary:

It is late in the year and the threat of frost is almost upon us, but now is the season for freelance designers, fresh and seasoned alike, to preen their feathers and perform the complex and often confusing rituals of courtship that is the annual search for new partners for the forthcoming creative season.

Over the years, freelancers have altered their techniques to attract the right sort of partner, and shown great initiative in adopting and deploying new methods and technologies, whilst the object of their attention have become ever more discerning in their tastes and preferences. 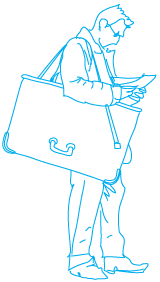 For instance, 20 years ago, most freelancers were scuttling from agency to agency, carefully carting enormous black portfolios, that when opened, would shine with brilliant visual displays, carefully crafted typography and exquisite window mounting, all in the hope of attracting the attention of that most fastidious of creatures; the lesser spotted Creative Director.

The reality was that many freelancers needed to spend longer periods of time carrying these heavy loads, that many became noticeably lopsided, which became a physical identifier for the freelancer and in some circles, a badge of honour.

This was so widespread during the last half of the twentieth century that the idiom ‘as wonky as a freelancer’ came into use, but has thankfully dropped from the lexicon as time progressed.

Alas, the proportion of freelancers to creative directors was always grossly unbalanced, forcing them to become ever more creative, daring and ingenious in their approach to impressing a suitable partner. 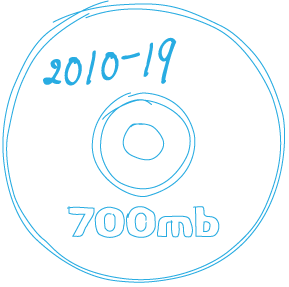 As digital technology made actual physical portfolios obsolete, it was obvious that many freelancers would perish, but those who survived did so with the aid of the Compact Disc. Shiny, small and iridescent, the CD could show much, much more of the freelancers courtship display: where the physical portfolio with 10-15 sleeves could only just be manhandled by the average freelancer, CD’s could hold hundreds. Everything that could be included was crammed in and presented in a neat, tidy plastic box. And they could be carried around in multiples, lodged at the reception desks of agencies, hoping to be noticed in the ever growing piles of CD’s that were beginning pile up like a beaver’s dam, slowing down the flow and building up pressure.

The evolutionary process, unable to sustain the buildup in the freelance market, reacted with a spectacular dam-break, forcing millions of CD portfolios out into the deltas of obscurity, because creative directors were now interested in portfolio websites and the process began once again.

With ever increasing technological wizardry, these websites soon became overproduced and bloated with animations, movies and music too. The real things that originally attracted creative directors – ideas, intuition, concepts – became lost in a murky digital sea, full of style, technique and coding. The creative directors, themselves bloated but undernourished by the over development of technology and the lack of organic, free-range typography soon began to evolve. 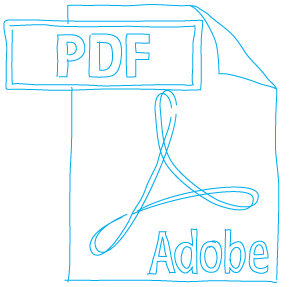 Creative directors began to demand a small PDF, with just one or two quality morsels. Their tastes had matured and they now craved smaller, more rarified and exotic portions, exquisitely presented in a format that could be easily stored on file to be quickly digested later.

Once more, freelancers responded as if in a symbiotic relationship evolving in perfect tempo, and PDF’s were attached to the emails of more creative directors than ever before. But just as millions of PDF attachments were being flung around the mailboxes of creative directors all over the world, many remained hungry, their carefully composed PDF’s featuring just the very best morsels of their portfolio never reaching their intended audience, but automatically filtered and stored in a special pouch known as ‘the file,’ where many PDF’s went in but few came out again.

The freelancers annual ritual will continue, but the creative directors, in their remoteness, will continue to devise new and more frustrating methods to thwart them. The circle of life.

Ok, so I got a bit dramatic just then, but I thought that this was a good way to illustrate the situation many freelancers are in; they need to make direct contact with creative directors – after all, it’s people who get hired, not their portfolios, so that initial contact is vital in order to make an impression.

It’s getting harder to speak to creative directors. They are protected behind a number of firewalls, starting with the portfolio email to an anonymous email account. It doesn’t take a lot of effort to find out who works where and get their email address, but even if you send a personal email directly to them you are not guaranteed of a response.

I recently made a number of small printed portfolios, all personalised to specific people and agencies. These were carefully handbound and packaged to provide something physical and show some good old-school non-digital skills, and mailed out through the old snail mail service. Not one single person responded, even with a standard ‘thanks but we’ll keep you on file’ email. Firewall 1

I followed up a few days later with an email to each one, reminding them of my postal portfolio and asked for a good time for me to call for a quick chat. Again, nothing. Firewall 2

The following week I called each one. Here are some of the more common scenarios that played out.

and then this type of thing begins:

Receptionist: “Sorry to keep you waiting. I’m afraid (creative director) is unavailable/in a meeting/not at his desk/is out of the office right now (etc).
Me: “That’s ok; could you tell me when would be a good time to call back?”

Receptionist: “If this is about freelance work you need to send an email with a portfolio attached.”
Me: “I have already sent (creative director) a physical portfolio in the mail and I’m just giving them a call to make actual contact with them. Is there a good time I could call back and speak with them?”

Receptionist: “You could email them directly. Do you have their email address?”
Me: “I have already emailed them. I understand that they are very busy, but is there a good time I could call back and speak with them?”

You get the idea. Firewall 3

I didn’t manage to get any further than the receptionist. Every. Single. Time.

Not one of them offered any other times to call, or gave me even an impression that someone may get back in touch. All but one reiterated the ‘send an email with an portfolio to this address’ line. I was even told by one that if they (creative director) hadn’t responded to an actual portfolio or the email communication already that I should accept that as a response. Nice.

It’s always been tricky getting a foot in the door as a freelancer. I accept that. It gets trickier when you can’t find the door. Can’t there be a better way than this?